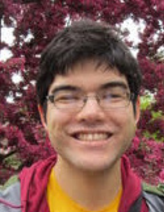 Samson Condon is a Ph.D. candidate in the Department of Biochemistry at the University of Wisconsin-Madison. He graduated from Cedar Falls High School in 2009 and began attending Iowa State University in the Department of Biochemistry, Biophysics, and Molecular Biology that fall. Samson joined the Nikolau Group as an undergraduate researcher in 2010 under the mentorship of Dr. Marna Yandeau-Nelson. There, he analyzed the cuticular wax composition of maize silks using gas chromatography-mass spectroscopy and developed new protocols to increase sample throughput. He spent the summer of 2010 at SUNY-Albany as an REU intern and the spring of 2012 at the Nihon University School of International Relations in Mishima, Japan through the ISEP study-abroad program. He graduated suma cum laude with Honors from Iowa State University in 2013 with a B.S. in Biochemistry. For his involvement in academics, research, and the BBMB Undergraduate Club, he was named a Goldwater Scholar and a Robert Stupka III Scholar. Samson joined the laboratory of Professor Alessandro Senes at the University of Wisconsin-Madison in 2013. His research there focuses on using computational tools and biophysical experiments to understand how membrane proteins fold and interact. Specifically, he is interested in modeling the quaternary interactions of proteins within the bacterial divisome and measuring the thermodynamics of transmembrane helix association for a common structural motif. He is currently a predoctoral fellow in the Computation and Informatics in Biology and Medicine (CIBM) Training Program.